We have 295 guests and no members online

Tulingan is the Filipino name of Mackerel tuna or Skipjack tuna. Ginataan in Filipino means cook with and in coconut milk, hence Ginataang Tulingan is Tuna in Coconut milk. In San Pablo City in the Province of Laguna, Ginataang Tulingan is a common fare. Almost all housewives in the city has their own version of this dish, but all I can say is that from those I tasted already, everyone has made it so delicious especially when there is enough coconut milk.

The fish is cleaned, wrapped in banana leaves then cooked in coconut milk until just enough sauce from the coconut milk is left. Here is a photograph of Ginataang Tulingan. I wish you can also one day visit the Philippines and enjoy this great dish, too as I enjoyed it. 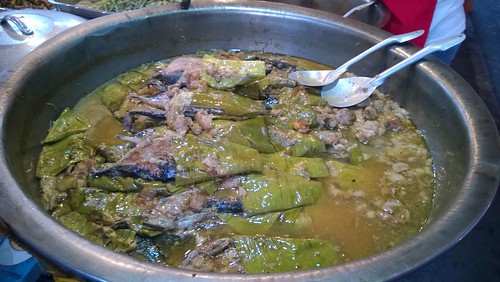 The above picture is  one version of Ginataang Tulingan sold in night street food market in San Pablo City, Laguna.Tulingan (fish) is wrapped first in young banana leaves.

Below is another version of Ginataang Tulingan, a much simpler version with added slices of eggplant. This dish is one of the dishes our carpenters wanted for lunch while we were building our house in the Philippines. I am not very fond of cooking fish except when it is canned tuna, but I like anything cooked with coconut milk.  and on my next vacation to my home country l have the intention learn cooking Ginataang Tulingan from the master cooks in Laguna. Food cooked in coconut milk  was not part of our meal when we were young, perhaps because those times we cant even afford an expensive grated coconut. 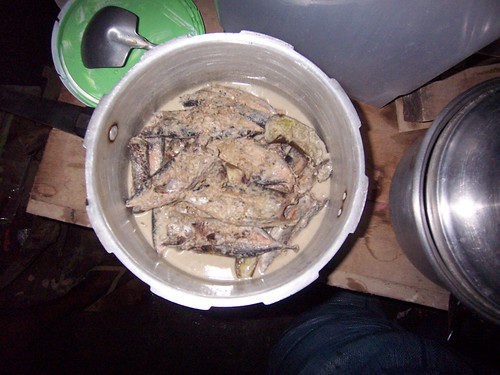