We have 304 guests and no members online

Brathering refers to a traditional dish from Germany made from fresh Herring (green Herring) which are cleaned (with head and guts removed), filleted , dusted with flour or floured and fried and then pickled in vinegar marinade.

Brathering literally means "fried Herring". But a Herring can only be called "Brathering" when the Herring is fried then marinated in vinegar

Brathering is served cold usually with Bratkartoffel (cooked and fried potatoes with slices of onions), or with newly baked Brötchen, a German bread or buttered toast and green vegetable salad.

Below is a picture of Brathering (on the right side) which is served in a Restaurant in Bremen (Goedeken in Berckstrasse)  serving traditional foods from North Germany. This Restaurant also serves another traditional food called Labkaus.

Baumkuchen refers to one of the many traditional  cakes from Germany, a German Tree Cake. It is a layered cake coated  with chocolates . Baumkuchen is literally translated as "Tree Cake" (Baum = Tree and Kuchen = Cake)

Baumkuchen has a characteristic concentric rings that appear when sliced which resemble tree rings  that give the cake its German name. 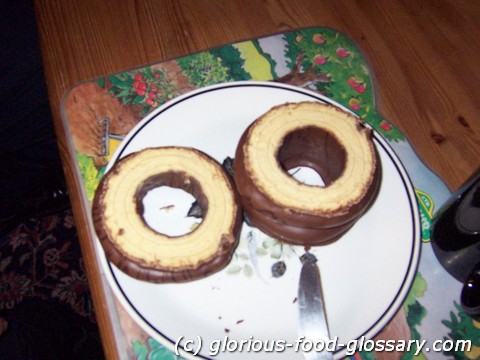 The origins of Baumkuchen which is known in Germany as the „King of Cakes“can be traced back into the distant past, from the 15th century and lingered in Europe until the 20the century.

Baumkuchen is also well known in Japan as it is in Germany. In Japan, it is known as „the Ultimate Wedding Cake“. The first German confectionaer to bake Baumkuchen in Japan was Karl Juchheim who was captured by the Japanese during Worl War I in China. The Juchheim company is very famous in Japan and their Baumkuchen is usually used for presents or souvenirs given for the guests at wedding receptions.

Enjoy the pictures below of Baumkuchen I always buy in Germany during the Christmas season. 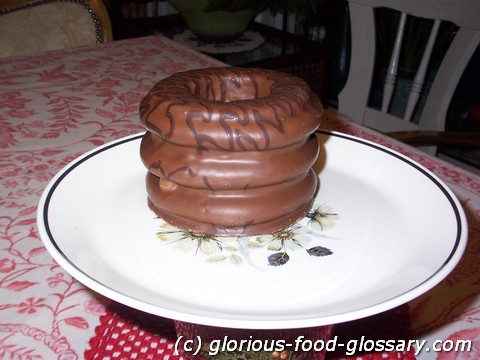 Botsi refers to one of the many Street Food in the Philippines which is made from the esophagus of chicken that are cut into small pieces, battered and deep-fried and served with a spicy Sawsawan (Dip) made from Vinegar (Suka).

Botsi can also be skewered and grilled.

What I have seen in San Pablo City in the Philippines during the daily Night Food Market  is the battered and deep-fried version of Botsi , like the picture below. My friend who enjoys tasting these unique Street food enjoyed eating Botsi a lot together with the spicy Sawsawan that comes with it.

A plate wrapped in plastic can also be seen on the left side of the picture where the newly fried Botsi can be eaten swimming in the spicy Sawsawan. How I wish I can eat and enjoy them too. Hopefully, one day 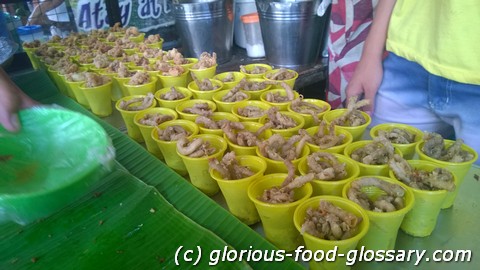 Biko refers to one of Philippines sweets made of glutinous rice cooked in brown sugar and Coconut milk.

Biko is also spelled as Bico. They are made in different ways in every region of the country , but the main ingredients are always glutinous rice (Malagkit) and Coconut Milk (Gata) and of course the brown sugar (Asukal) to sweeten it.

Bico is best served with Latik.

Below is a picture of Biko sold using a mobile cart. One of the lovely sights we can always see in Philippines streets, the different raw or cooked food sold by mobile carts around.

Bicol Express refers to a dish from the Philippines.

Bicol Express is a traditional dishes from the Philippines, specifically from the Bicol Region which is famous for cooking spicy dishes employing the use of chilies, thus its name.

Presumably, they are called Bird's Eye pepper because they have been spread by the birds which are not affected by its heat. It has a similar heat  as Habanero pepper. They come in yellow, green and red, but said to be in black and purple color

In the Philippines, Bird's Eye chili pepper is called Siling Labuyo and so far I have only seen them in green, yellow and red colors.  They are used in making dips (Sawsawan) and in dishes, such as Dinuguan and is extensively used in the Bicol Region of the country. In the Philippines, moreover, only do not use the fruits of this plant, but also their leaves which we used for making delicious soupy dishes as Tinola , where the leaves (Dahon ng Sili) is one of the important ingredients.

In the rural and provincial areas of the Philippines, you will mostly see them growing in almost everyone's backyard and they are always  available in the wet markets, we call Palengke. 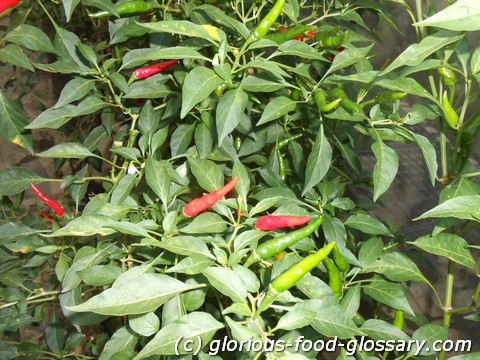