We have 99 guests and no members online

Chakkakuru Olarthiyathu is the Malayalam term for Jackfruit seeds Stir-Fry. The jackfruit seeds are stir-fried with slices of onions, and spices such as Kadugu (Black mustard), Turmeric powder, red chili powder, freshly grated coconut  and curry leaves . It is one of the dishes made from the different parts of Jackfruit, such as the seeds.

Chakkakuru is the Malayalam word for Jackfruit seeds. Chakka is Jackfruit in Malayalam, the language of the Indian state of Kerala.

Jackfruit seeds are not made into savory dishes in the Philippines, as far as I know.When I was young, my mother used to gather these seeds whenever she purchased Jackfruit (Langka) then boil them with a bit of salt then serve them to us for snacks.

One day when I visit again my country, the Philippines. I want to try cooking Chakkakuru Olarthiyathu and let my siblings enjoy what I have learned during my stay in Kerala, India.

Pictures below are 2 kinds/types of Chakkakuru Olarthiyathu cooked by my family friend in Allepey, Kerala, India. One is with grated fresh coconut without red chili and the other one without grated coconut but with red chili powder. I enjoyed both as I love Chakkakuru, Coconut meat and lots of spices. 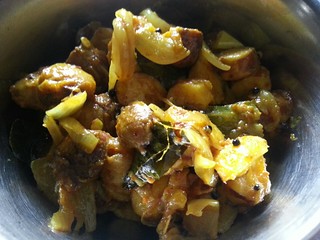 Clearly seen in the picture above, the onions, Kadugu (black Mustard seeds) and the Curry Leaves 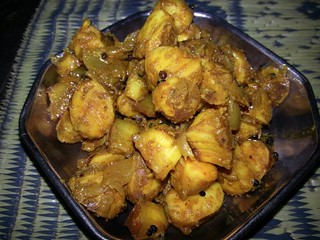 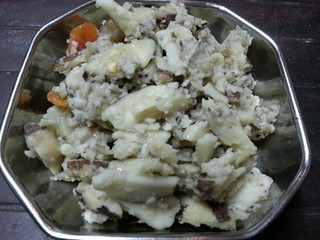 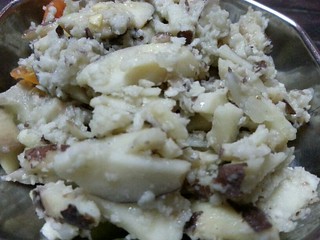 Coriander Seeds refer to the seeds of the Coriander plant which is used to give warm, aromatic and  citrus flavor to food. Mostly used in Indian cooking and also Middle Eastern and Mediterranean Cuisine.

Coriander Seeds are available in whole or grounded/powdered forms. It is one of the components of Garam Masala and Harissa. It can be added to savory food , like Chutneys, casseroles and Pickles (found in Cornichons and pickled Cucumbers) and sweet cakes and baked products.

Chami also called Pancit Chami refers to a Filipino variety of Pancit (noodle dish) which is similar to Lomi, but will less broth and is cooked stirred fried. Chami has become a signature dish and specialty of Lucena City and nearby areas follow suit, like Tayabas, Sariaya and Pagbilao. Chami is cooked with fresh egg , flour-based noodles and to give it its distinct flavor, and pork or chicken stock is used to cook it. The noodles in Chami is called Miki , a little wider in strip than the regular one, sautéed in various variations with nourishing mix-up of chopped cabbage, liberal dose of pork or chicken liver, chicharon, particles of meat, boiled quail eggs and slice onions as toppings.

In Quezon Province, Chami is cooked hundred of ways, each household has its own style of cooking it, just like many other where the style and ingredients used depends on the cook or who prepares it, but the basic ingredient which is the fresh noodles is the same. New flavors were also introduced by some restaurants in Lucena City, like the Tamis-Anhang (sweet and spicy) a delicious combination of noodles, soy sauce , bit of sugar and chili (called Siling Labuyo in the Philippines) Historically, many believed that Macao (Chinese) cooks introduced the Chami noodle locally, when most of the ethnic Chinese manned the kitchen of Lucena’s restaurants several generations back.

The word Chami is said to derived from the Chinese word Cha or Chaocai which means stir-fry-stir-fried ans Mi or Miantao that means noodles.

Lucena City is one of the cities located in the Province of Quezon in the Philippines. Chami is one of the local and well-known deliacacy in Lucena. A Festival is Held annually in this said City to which featured the Chami since 2006 where Chami cooking and eating competition are held

I have tasted a lot of Pancit in my whole lifetime, but I have never heard of and tasted Chami. Soon I am home, I will definitely go to Lucena to taste this noodle. I have been in Lucena City port last March, if only I knew, I could have soend more time for a bowl of Chami.

Below are pictures of Chami which I promised to taste when I go home to my Country the Philippines. As promised, I traveled to Lucena to taste their Food, especially their famous Pancit Chami. 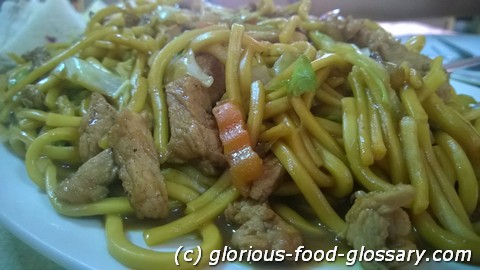 Cream Bread refers to a sponge bread stuffeed/filled with sweetened fresh cream . It is one of the breads which is eaten as snacks. They are available and sold in bakeshops in Allepey (Alappuzha), Kerala, india.

Choora Achar/Achaar is the Malayalam term for Tuna Pickles which is made from small cuts of fresh Tuna fish cooked with lots of spices, Vinegar, Salt, Red and Green peppers and Curry leaves (Please see related article on Achar/Achaar)

Choora is the Malayalam word for Tuna.

The pictures below show the fresh 2-kilo Tuna fish being prepared for making Choora Achar for me. Choora Achar is my most favorite Achar coming from Allepey, Kerala, India, not only because Tuna is fresh and delicious, but more so because it was cooked for me with love by my second family in Allepey. Grandmother cut the Choora, her special way and Aunt Lily and Gracy cooked it for me with TLC

I will never forget these three (3) wonderful cooks from Allepey.

Gracy showing me the Choora which she bought fresh from  a nearby Fish Stall in Allepey. 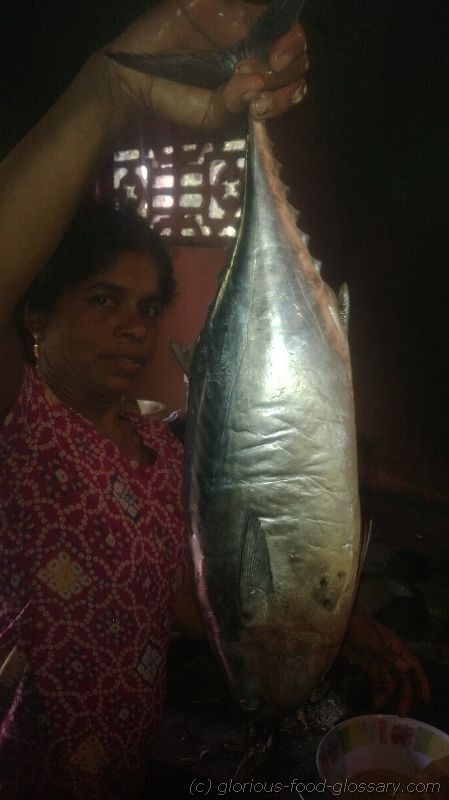 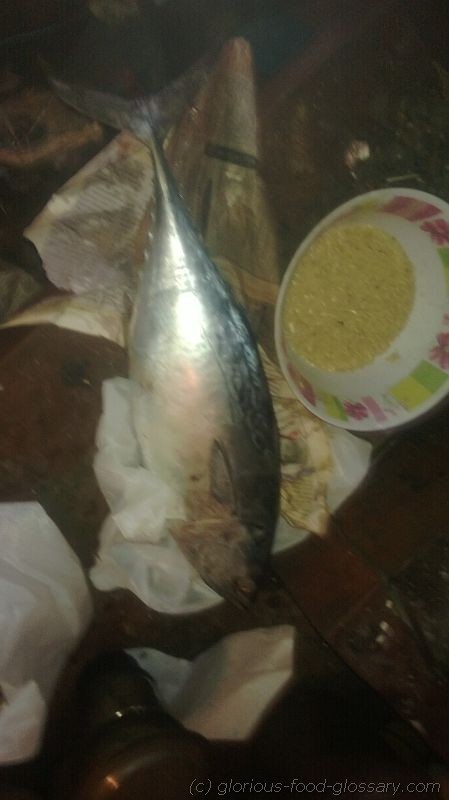 The Choora Achar while being cooked in Uruli. 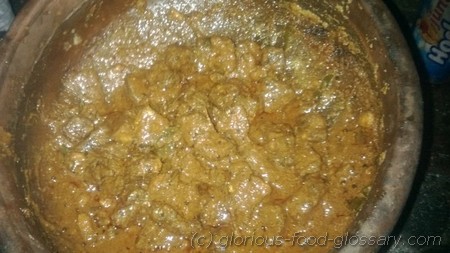 Cabbage and Carrot Thoran refers to one of Kerala's Thoran dishes made from finely chopped or grated Cabbage and Carrots stir-fried in grated coconut, slices of onions/shallots, spices and Curry leaves . (Please see related article on Thoran)

Below is a picture of delicious Cabbage and Carrot Thoran prepared by my friend in Allepey, a district in Kerala, India. Can be seen clearly are  the Curry leaves and Kadugu (Black mustard seeds) 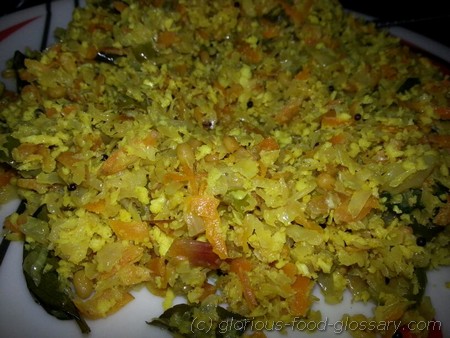