We have 157 guests and no members online

Gothambu Unda refer to sweet balls from Kerala, India made from Wheat, ghee , jaggery, Cardamom and grated fresh coconut then formed into balls and steamed. Gothambu Unda is literally translated as "wheat ball"

Gothambu and Unda are Malayalam words for Wheat and Ball, respectively

It is said that Gothambu Unda have been famous in Kerala as the standard prison food. Nowadays, people from Kerala used Gothambu to make various dishes and sweets for snacks.

Below is a picture of the Gothambu Unda made by a family friend from Allepey, Kerala, India using Cracked/Broken Wheat called Gothambu Nurukku or Gothambu Ari in Malayalam, the language of spoken in the state of Kerala. 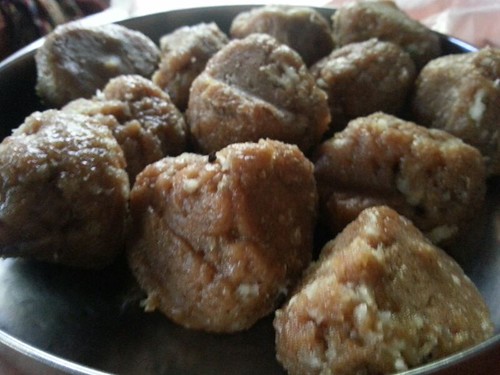