We have 115 guests and no members online

Coca Mallorcan also called Mallorcan Coca refers to Mallorca's open savory tart. It is Mallorca's version of Pizza which is usually eaten as a snack, but is an important food in Mallorca and always served during important family occassions or celebrations and other important feast in the Island.

Coca Mallorcan is made with different and wide selection of toppings, but unlike the Italian Pizza, it has no cheese on them and of course the Pastry made from flour.

Below are two (2) of the varieties of Coca Mallorcan, based on the toppings used:

Other toppings which can be used are Red and green Peppers, Onions, Black olives and Anchovies, Flaked tuna or other flaked fish, Sobrasada or Bacon. Almost the same toppings used in Pizza with the exception of the cheese.

Coca Mallorcan is usually made for many people on a large tray and cut into square slices when served.

Coca Mallorcan was served to us in Mallorca during the post-wedding party of my step-son who got married to a Mallorquin, together with Bread Pudding and Mallorca's famous Ensaimada to my delight because we also have Ensaimada in the Philippines which is very similar to Mallorca's. Below is a picture of slices of Coca Mallorcan (the left side) with Spinach and Red Pepper as toppings. 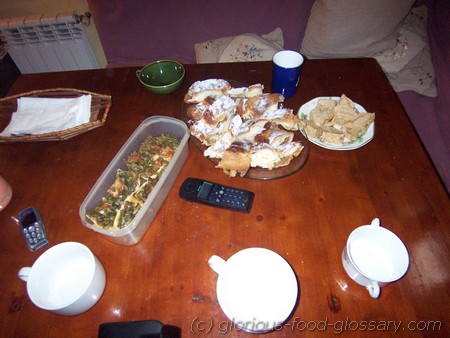