We have 222 guests and no members online

Sawmill Gravy refers to the traditional gravy from the Southern part of the United States which is often served with biscuits, sausages, meat patties and eggs. It is made from milk or cream, meat drippings and flour and salt and pepper to taste.

During my roadtrip in 2016 in the USA. This Sawmill Gravy became a part of my breakfast meal with those delicious and interesting Biscuits. I did not encounter any motel or hotel where we stopped for breakfast seeing Biscuits without the Sawmill Gravy on the side.

Here below on the lower right side of my plate was a Biscuit covered with Sawmill Gravy. It is  one my interesting breakfasts in a traditional diner when we were already nearby Forthworth, Texas. 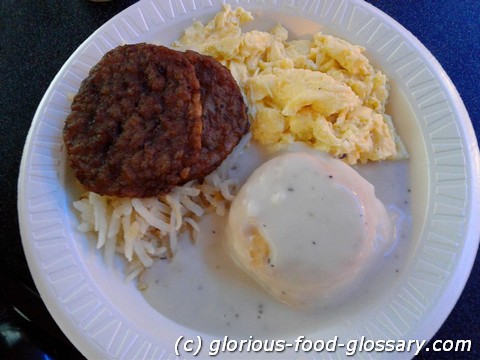