We have 418 guests and no members online

Gesztenyepüré is actually not the original recipe of Hungary. It is known as Mont Blanc in France. But the earliest record of Chestnut Puree has originated in Italy around 1475 and was originally yellow in color because the chestnuts were pickled. The first recorded Chestnut Purée recipe was found in an Italian cookbook printed in Florence in 1475. Some years later, the French  followed and made their own Chestnut Puree based on the original recipe and they call the popular and seasonal Chestnut Purée (dessert) as Mont Blanc, because of its resemblance to the snow covered mountain top named Mont Blanc. It is only in the 18th century that Hungarians started to make this dessert and fell in love with it

Hungary has plenty of sweet Chestnuts and they are a popular and versatile ingredient in many Hungarian foods, that includes cakes and sweets especially during Christmas time.  Harvest of Chestnuts  starts late September and often lasts until the end of October. Sweet Chestnuts are a seasonal fruit , eaten mainly in the winter.

Nowadays, boiled and roasted chestnuts minus its hard skin covering are available in supermarkets and foodshops all over Europe. I can buy cooked/boiled Chestnuts in Germany anytime in vacuum packs and eat them straight. When I was young, we can only taste roasted Chestnuts in the Philippines during Christmas time. It is one of the special foods for the holidays in the Philippines. It was rare and expensive, but my Daddy always made sure that we have them on Christmas.

This Hungarian dessert has shown that Chestnuts can also be prepared into a delicious dessert and  not just for roasting.

Chestnut is called in Hungarian as Gesztenye.

Gesztenyepüré is my good friend's favorite dessert. When I visited them in Vienna, Austria, they brought me  to Hungary for lunch and they chose this dessert for me to try. Roasted Chestnuts has been a favorite since I was a child. I loved this dessert, too. Below are pictures of Gesztenyepüré we ate in Austria and Hungary.

The  Gesztenyepüré in Hungary was served in the traditional way, in a footed glass dessert cups 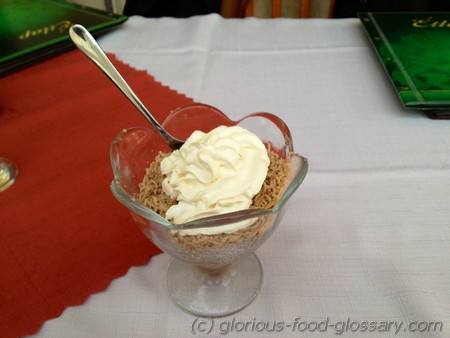 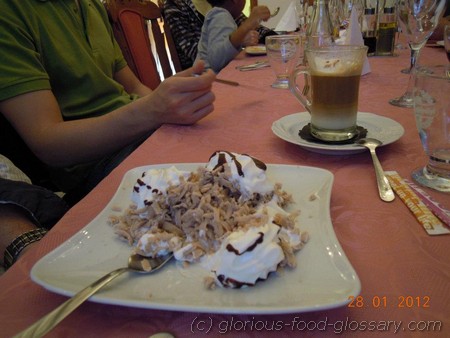