We have 123 guests and no members online

Arme Ritter also called Armer Ritter is the German version of French Toast, which is bread, usually stale bread or day old bread soaked in mixture of eggs, cream or milk batter with sugar and cinammon then fried in butter.

Diiferent countries have versions of Arme Ritter or Franch Toast, in Spain it is called Torriga, in England “Poor Knights of Windsor ,”  Denmark, Arme riddere. ”

In America, in one time or another,  it has been referred to as Spanish, German, or Nun's Toast and it first appeared in print as “French Toast” in 1871.

My mom, used to make French Toast when we were young for our breakfast and it was really delicious, for a long time now, I have been experimenting my own version and I was not successful getting the taste of my Mom's French Toast until I made it some days ago, while I was feeling so sad and all I wanted to do was to create something wonderful. So below is my version of my Arme Ritter, my very own French toast. 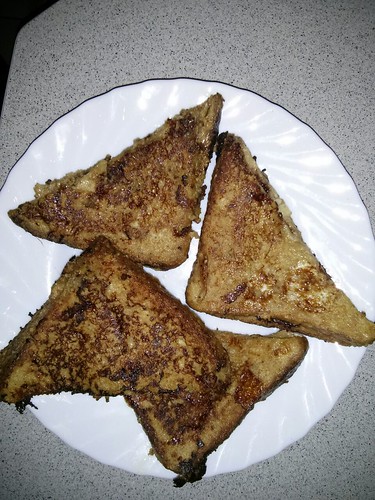 my very own version of Arme Ritter , the German version of French toast. I used wheaten bread filled with nutella and the others creamed honey, dipped in  mixture of milk, cream, eggs, sugar, cinnamon and cardamom powder then fried in butter. Amazingly good. Finally, i made it like my mom used too. Next time, I will fill it with a blueberry jam which is will also cook myself.