We have 180 guests and no members online

Batwan refers to a green sour fruit which is used as a souring agent for making Sinigang dishes (sour soup) in the Philippines in placed of tomatoes, Calamansi, Kamias and Tamarind (Sampaloc)

Batwan which is also called Batuan, Batuan or Batuwan or  Garcinia Binucao is indigenous to the Philippines and possibly Vietnam, and it is a relative of Mangosteen.Its fruit is somewhat round in shape, around 4 centimeters in diameter, greenish in color which turned yellowish when mature. They have a firm outer covering and contain a very sour pulp and several seeds. It has a sour taste but not acidic to the stomach. The Batwan tree thrives in parts of Bohol and Leyte as well but it isn’t used much in those cuisines.

The use of  Batwan fruit is one of the distinct features of Ilonggo cuisine, especially for cooking "Sinigang", Philippines sour soup or stew.

Batuan or Batwan is also known as Binukau or Binukaw in Tagalog (from where its scientific name was derived), and Balakut in Ilocano. Batwan is called in various names in other parts of the country:

The use of Batwan is dying out in most part of the Philippines and it might not even known in other parts of the country, except Negros and nearby areas that use it a lot in preparing some of their dishes.

Negros Region of the country, particularly Bacolod use Batwan as souring agents in cooking various dishes, such as Paksiw na Isda (fish cooked in vvinegar, Kansi (jackfruit with mung beans and coconut cream), Pinamalhan (a dry style Paksiw na Isda) and Tinolang Isda (fish with sour soup). Batwan is also use in cooking the classic dish named KBL (Kadios, Baboy and Langka) from Iloilo. In Negros, the people basically use Batwan to any dish that requires a souring agent instead of Tamarind (usualy souring agent in Luzon Island).

It is said that Batwan only grows in Panay or Negros, other people say that it is also abundant in other parts of the country, but perhaps not used as souring agent.  Batwan is a huge tree with lost of fruits  when it is in season. and it is  the only souring agent that the people knows in Panay and Negros Provinces/Islands. However, It is said to be used also in other Provinces, such as Leyte, Bohol, Masbate.

Below is a not so well-photographed picture of Batwan which was luckily shared by a friend from Iloilo to my brother who likes to experiment on other local products to make his Sinigang. 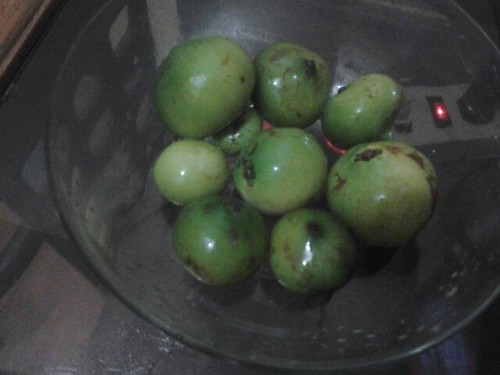 Personal Note: Based on my experience, Batwan is not so well-known in  Luzon Islands of the Philippines, where Kamatis (Tomatoes), Kamias, Calamansi and Sampaloc are used as souring agent in making Sinigang. Batwan is mostly used in the Visayas Island of the country, particularly in Iloilo (Negros Provinces). I came to know about Batwan because my first husband's family came from Iloilo and they used to have a cook who also came from the Province and used Batwan when cooking dishes like KBL,  Tinolang Isda and Sinigang