Mutta Chikkiyathu is one of the simple foods from Kerala, India which is made from scrambled eggs which are cooked plain or with usually chopped onions and salt and pepper to taste.

Scrambled eggs are basically the eggs that are stirred when cooked and without any added ingredients on it.

Picture below is Mutta Chikkiyathu (Scrambled eggs) served to me during my first breakfast in Allepey, Kerala served with slices of fresh Tomatoes (Thakkali)

To see the difference, picture below is an Omelette served in a Chaya Kada/ Chayakadda on my way to Munnar

Mutta Roast or Egg Roast refers to one of the simple and easy to cook dishes from Kerala, India using hard -boiled eggs of either Chicken (Kozhi Mutta) or Duck (Tharavu Mutta) cooked with onions, tomatoes, and spices such as ginger, coriander seeds, Kadugu (black mustard seeds), turmeric, Masala or fennel powder, Mulaku and Curry leaves .

Unlike, Mutta Curry, Mutta Roast is cooked without Coconut milk, but with tomatoes and dry.

Mutta Roast or Egg Roast is another dish which is always a mainstay for breakfast in Kerala served with rice, Idlin, Idiyappam and Chappati.

Below are pictures of Mutta (Egg) Roast

Mutta Curry refers to one of the many curries from Kerala which is made from hard -boiled eggs cooked with slices of onions, spices, such as chilies, turmeric, garlic, coriander powder, and curry leaves . Sometimes fennel seeds or Masala powder are also used and tomatoes are also added. Potatoes are often added and coconut milk is used for a perfect Kerala flavor.

Mutta Curry a very simple and common dish and is almost a part of every traditional Kerala breakfast. Even in some Restaurants around Kerala, this dish is always available for breakfast served with Puttu , Chappati, Idiyappam, Idli or rice.

A variation of Mutta Curry is called Varutharacha Mutta Curry where the eggs are cooked almost the same as simple Mutta Curry but in roasted coconut sauce made from roasting grated coconut meat.

There are 2 kinds of eggs which can be used to make this Curry. Kozhi Mutta (Chicken egg) or Tharavu Mutta (Duck Egg)

Below are pictures of Mutta Curry which I have tasted in Allepey, Kerala, India. It is one of the easiest Kerala recipe that I have tried cooking while I was on vacation in the Philippines. 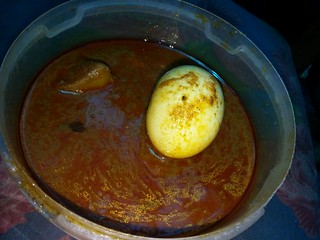 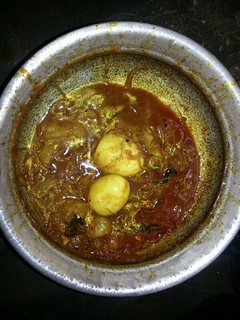 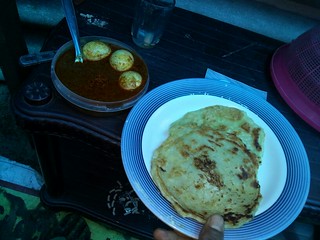 Mathi Cutlets refer to Kerala style fish cakes patties/croquettes. This particular fish cutlets are made from Mathi, the Malayalam term for Sardines.

Fish Cutlets are made from varieties of fish, such as Mathi (Sardines) which are finely chopped and mixed with boiled mashed potatoes and spices, dipped in a Kadalamavu (Chickpea flour) or Rusks made into breadcrumbs then deep-fried in Coconut oil.

Pictures below are uncooked/raw Mathi cutlets ready for frying in Coconut oil.

The next pictures below are Fish/Mathi Cutlets after deep-frying in Coconut oil. Often served with rice, curry or chutney for lunch or dinner. But can also be served as savory snacks.

Meen Porichathu also commonly called as Fish Fry is one of the popular dishes from Kerala, India  which is simply  fried fish which is made special by coating or marinating the cleaned fresh pieces of fish in Masala powder , then deep fry in coconut oil until they are crispy.

Coconut oil which is the favored oil for cooking by the Malayalees is the secret of delicious dishes in Kerala, India.

Please enjoy the pictures of Fish Fry made in Allepey, Kerala, India. 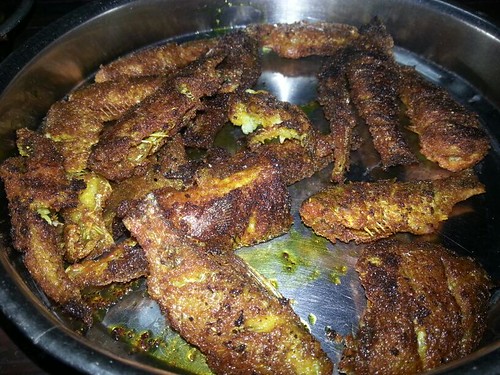 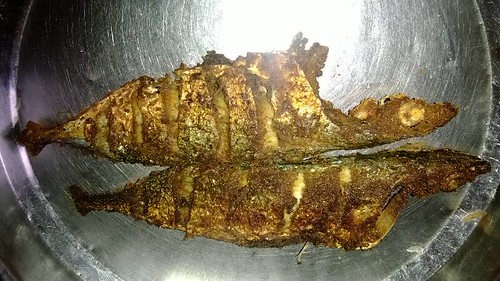 Coating the cleaned whole piece of Tuna  with Masala powder first for some time before frying in Coconut oil gives  the Keralite Fish Fry  its distinct tasty flavor.

Below is one of the special Fish Fry "fit for a Prince". A Karimeen Fry made from fried Pearl Spot. This is a delicious meal of Karimeen Fry served with salad of raw sweet red onions on top.  Prince Charles of England ate what I have eaten in Kerala, India after a wonderful and quiet boat tour of the Backwater of Allepey.

Karimeen (Pearl spot fish) fry is a sought after delicacy in Kerala. The Pearl Spot fish is marinated in a mixture of lemon juice, red chillies, and other spices and Masala Powder, too and and deep fried until crisp and golden brown. This is an exotic dish of Karimeen fry cooked Kerala style. The Karimeen fry is a spicy fried fish coated with the delicious and spicy Masala.

Meen Curry is one of the popular dishes from Kerala which is made from varieties of fish available in the state, such as tuna, mackerel, sardines, and most special is the one made from Pearl Spot which is indigenous to Kerala. Other fish varieties can also be made into Meen Curry which is made by cooking the fish with several spices and curry leaves

Below are pictures of varieties of Meen Curries which I tasted while in Allepey, Kerala, India:

More pictures below of different kinds of Meen Curry cooked by my hosts in Allepey, Kerala, India. 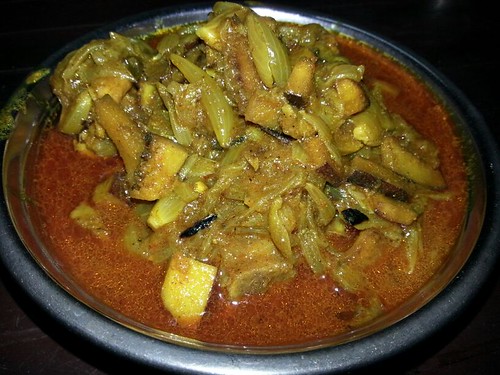 Below is a set of meal being sold during the Trivandrum, Kerala Food Festival during the Christmas season. The set includes Kappa Puzhukku (boiled Cassava), Rasam  and Meen Curry. 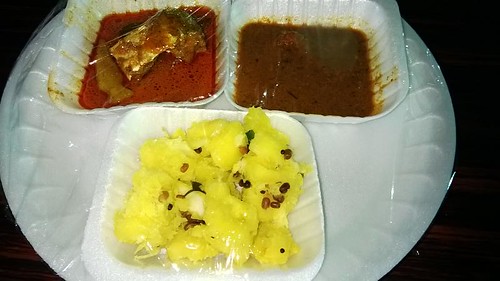 Mathi/Chaala is Malayalam for Sardine. 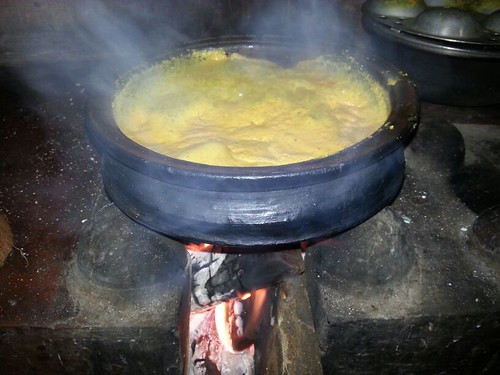