We have 85 guests and no members online

Peel refers to a long-handled, usually wooden, paddle used by bakers in many parts of the world to transfer breads in and out of hot ovens.

Plantain is a green skinned banana with a firm texture, also called a cooking banana.

Pigik refers to a prized and very expensive fish used for culinary purposes in Davao, one of the provinces in Mindanao Island of the Philippines. It is said that Pigik is a type of fish that only thrives in the brackish water of the Rio Grande river of Cotabato and those  who tasted it swear that it has the tastiest meat but comes with a price of at least P 1,000.00 per kilo. When served steamed, it said to melt in the mouth and with slight firmness on the meat.

Pigik is called large scale grunter in English. Its species name is Terapon theraps. It is also called Imelda fish in Davao.

Parisienne refer to potatoes molded into balls with a melon scoop and fried or roasted.

It also refers to a sauce called Parisienne Sauce which is a rich, white, veal Velouté sauce prepared with white wine and mushroom essence, thickened with cream and beaten egg yolks and seasoned white pepper and lemon juice. Parisienne sauce, which is one of the basic sauces is used with veal and chicken dishes.

Parisienne sauce is said to have originated in the rich pasturelands of Bavaria in Germany and got its name for its blonde color rather than where it is originated.

Parisienne also refers to a French long-shaped bread similar to Baguette but thicker and heavier than Baguette. It is made from wheat flour, water and yeast with crispier crust and soft crumb.

Pita bread is a Middle Eastern yeast bread shaped into a flat oval that is baked and cooled in damp cloth. Pita can be split open to form a pocket and stuffed with sandwich fillings such as Döner which is one of the popular fastfoods in Germany.

Below is a picture of Pita which I used to eat with the Puten Döner cooked in a pan  which I discovered from one of the Food Delivery services in Germany. 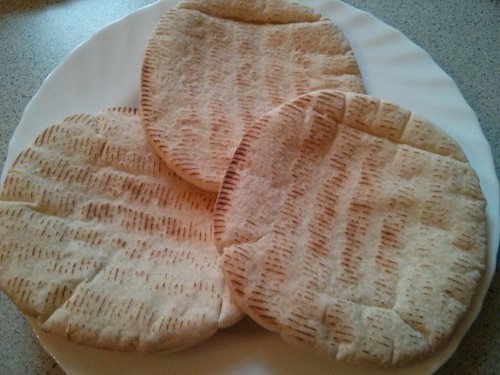